Change is in the air, and it looks green! Host cities submit city planning and building proposals, promising sustainability and continued use of Olympic facilities after the Olympic flame has passed. But cities like Beijing and Montreal have failed to follow through with that promise. Many of the structures now sit vacant or are only occasionally used. The London Olympics have set a new precedent that will bolster the green movement around the globe. This Olympic building below is constructed from phthalate-free PVC, which is stretched over steel frames and plywood. The structures provide stability and eliminate the typical flapping associated with most other tents. 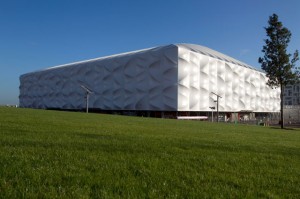 The basketball court (pictured right), shooting range and water polo building can all be disassembled upon completion of the Games. In fact, the shooting range will be transported to Glasgow for the 2014 Commonwealth Games.
The London 2012 Games have made some pretty serious investments in green innovation. This infographic covers the highlights of their sustainability
More Reading