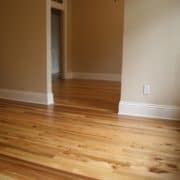 Fast forward to 2004 when the building was purchased and developed into luxury condominiums. Lakeview sits on the edge of Lake Maria Sanchez in a prime area of town just blocks off the heart of the old city.

October 2016 brought powerful hurricane Matthew to the area, which flooded the historic district of America’s oldest city as it passed at high tide.  Sadly, the Lakeview building took on five inches of water from Lake Sanchez.  Goodwin worked closely with the owners association to replace the original heart pine flooring.  Most units were restored using River-Recovered Heart Pine Character or Antique Longleaf pine.  Much of the replacement heart pine was either 2-1/2″ or 3-1/4″.  The 800-1000sf units are now light and airy living spaces with wonderful architectural transoms over the doors and arched passageway. Goodwin is always most pleased when we can be a part of historic restorations.