Goodwin was both honored and humbled to work with Artisan Hardwood Flooring in Austin, Texas to provide beautiful, historically accurate wood flooring for the Texas Governor’s Mansion restoration. The Texas State Preservation Board managed and was responsible for the project, ensuring each and every aspect of the restoration was historically accurate. Pat Bailey at Artisan Hardwood Floors oversaw the selection and installation of the flooring and selected Goodwin to provide the first growth wood for the floors.

Pat visited two homes designed by the same architect who designed the Texas Governor’s Mansion. Working with the State’s project manager, he examined the grade, lengths and quality of the boards used in those projects and discussed what was expected on the Governor’s Mansion Restoration Project to ensure the wood he used was historically appropriate. Pat then traveled from Texas to Goodwin’s plant in Micanopy, Florida to hand select wood to meet the exact requirements of the project.

The overall scope of work was quite a challenge. First, the original subfloor was not always consistent, though built with 1” longleaf pine in 1856. Some areas had been altered and leveling was required. Room transitions also needed adjusted, so special consideration and accommodations were made. For instance, although the length of the boards extended up to 16 feet, everything was end matched (tongue and grooved at the end of the boards) to preserve structural integrity. Second, two additions had been built onto the original structure through the years so a few of the subfloors were concrete (specifically in the 2012 addition). Pat had to make transition adjustments so the entire mansion “flowed” as a single structure. He was asked to hand scrape the wood rather than flat sand, and used a traditional wax finish.

Special thank you to Pat for inviting Goodwin to be part of this restoration and choosing us to provide the material for the magnificent replacement flooring. This will go down in our books as one of Goodwin’s most celebrated projects!

The next time you happen to be in Texas, consider touring the Texas Governor’s Mansion – we would love to hear your feedback!

An interesting tidbit:
Several years ago George Goodwin bought some exceptionally fine grained and very large antique pine beams that came out of the Swan Building in Dallas. They were so nice that George decided to store them in our warehouse until just the right project came along. And then, along came Pat Bailey of Artisan Hardwood Floors! The Texas Preservation Board benefited from an additional LEED credit for material reclaimed within 500 miles of the Governor’s Mansion.

PRESS RELEASE from the OFFICE OF THE GOVERNOR RICK PERRY

Begin Move Back to Governor’s Mansion as Project Nears Completion 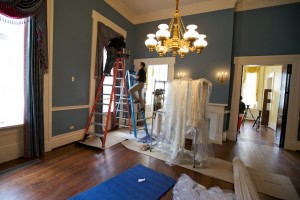 “The historic Texas Governor’s Mansion has been a symbol of Texas pride and resilience for decades, and now as its restoration nears completion, we enter a new chapter in its history,” Texas First Lady Anita Perry said. “Returning these important pieces to their rightful place in the Governor’s Mansion brings us one step closer to completing the restoration of this Texas treasure, which is one of the cornerstones of our state’s rich heritage.” 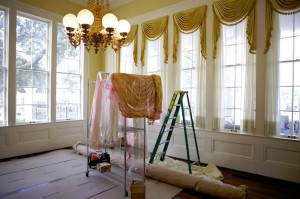 What began as a deferred maintenance project of the Governor’s Mansion in October 2007 became a major restoration effort following a massive fire set by an unidentified arsonist in June 2008. The restoration has been made possible by nearly $3.5 million in private donations and a $21.5 million appropriation by the Texas Legislature.

No arrest has been made in the arson case at this time. The Texas Department of Public Safety has offered a $50,000 reward for information leading to the arrest of the arsonist. Anyone with information related to the Texas Governor’s Mansion arson is urged to call Crime Stoppers at (800) 252-TIPS (8477) or the State Fire Marshal’s Arson Hotline at (988) 252-8477.

For more information about the status of the Governor’s Mansion Restoration, please contact the State Preservation Board at (512) 463-5495.