Every Goodwin floor is a conversation piece, and each detail prompts a story for its rich and historic past.  We know all about the durability and sustainability of a quality heartpine floor.  You can see it in the tightness of the River-Recovered® longleaf grain and you can feel it in the density.  Many owners of vintage homes have told us when they perform repairs to their heartpine framed houses, “you have to pre-drill nail holes; don’t ever try just driving them in.”

But, don’t take our word for it.  Here’s a noteworthy voice from the past that rings just as true today:

Long before helping to preserve California’s great Yosemite Valley or founding the Sierra Club, America’s preeminent naturalist, John Muir, stepped out of his Indiana front door one day and walked to Florida.  Muir recounts this journey in his 1867 book, A THOUSAND MILE WALK TO THE GULF.  Having passed through the mountains of North Carolina and continuing through north Georgia towards Savannah,  Muir first encounters the stately old long leaf pine forest that would essentially be gone by 1930; logged almost to extinction.

September 30. Between Thompson and Augusta I found many new and beautiful grasses…Here, too, is the northern limit of the remarkable long-leafed pine, a tree from sixty to seventy feet in height, from twenty to thirty inches in diameter, with leaves ten to fifteen inches long, in dense radiant masses at the ends of the naked branches.  The wood is strong, hard and very resinous.  It makes excellent ship spars, bridge timbers, and flooring.  Much of it is shipped to the West India Islands, New York, and Galveston (pp. 54-55).

Who knew that the “Father of the National Park System” might have also made a great flooring salesman?  Could Muir have even guessed that only 60 years later most of these towering giants would be gone as a result of their being so very useful in exactly the ways he mentions.

After hopping a boat from Savannah to Fernandina, Florida, Muir continued on foot to Cedar Key passing through Gainesville and very near to the Goodwin Mill.  If he’d met our saw crew I wonder if he’d think the same of them as he did of other Florida loggers he met in the piney woods?

October 16. Near the middle of the forenoon I came to a shanty where a party of loggers were getting out long pines for ship spars.  They were the wildest of all the white savages I have met.  The long- haired ex-guerrillas of the mountains of Tennessee and North Carolina are uncivilized fellows; but for downright barbarism these Florida loggers excel (p95). 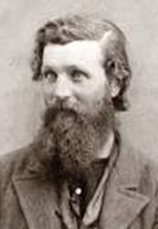 *Did you know last summer, Goodwin Company supplied the Cedar Key State Museum with antique heartpine to do needed repairs in the St. Clair Whitman House on the museum grounds?  On your next visit to Cedar Key please visit the Whitman home.  Try to pick out the old vs. the new and learn more about John Muir in this, his final destination on a thousand mile walk to the sea.

Installing Wood Floors – It’s Not an Expense, It’s an Inv...