Old Wood is growing in popularity with interest in sustainable design. A great architect we work with asked if we could arrange to have Norm Abrams of ‘This Old House’ fame and Russ Morash, producer, sign a piece of Goodwin’s old wood. This is the piece of wood that Norm and Russ signed for Chris Baker, Moor & Baker Associates of Vero Beach, Florida: 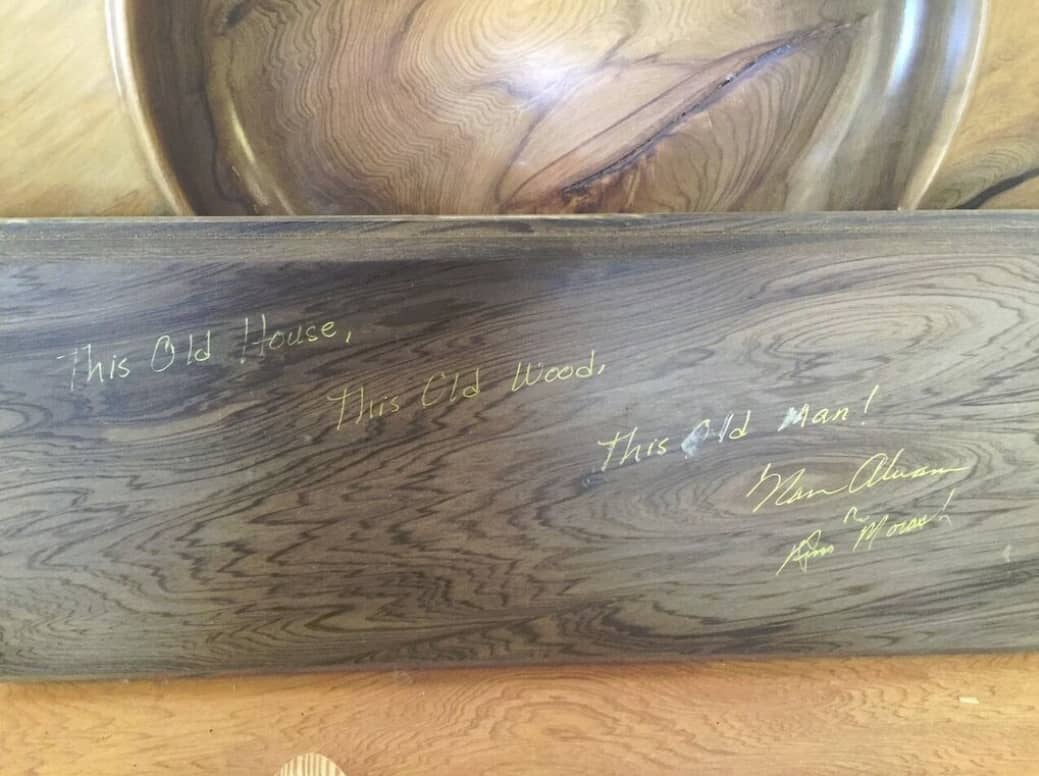 The history of sinker cypress / heart cypress is one that never gets old:

Sinker Cypress, of the Bald Cypress tree, is one of the few surviving prehistoric species. Heart cypress logs, estimated by scientists to be at least 100,000 years old, were unearthed in excavations for the Mayflower Hotel, in Washington, DC.

One of the most picturesque trees of the American forest is the full-grown cypress. It is slow growing tree, and reaches its best development in tidewater swamplands. Trees well over 1000 years old, towering to heights of over a hundred feet, were common in virgin stands. The mature cypress develops a swelled butt of 8 to 10 feet in diameter and is surrounded by so-called knees, which are really offshoots of the root. It is believed they serve the double purpose of respiratory organs and anchorage.

Preliminary to logging the cypress forests of the 1800’s, the trees to be felled were marked and girdled a year, or several months an advance. Girdling was done by cutting a notch three inches deep around the circumference of the trunk and about three feet above the ground with an ax. Thus the tree was killed and the wood was allowed to lose part of the moisture, so that when it was cut, the logs would float.

The Wilson Cypress Company in Florida once cut cypress that was of markedly superior quality. Wilson’s rafts on the Ocklawaha River in Florida were about 25 feet wide and 32 feet in length. The logs were held in place by an outside log called the boon. A cable was wrapped around this log and interwoven between the other logs. Holes were drilled in the ends of these outside logs to connect the rafts together. When the rafts were towed they were made up into 150-foot sections.  About six of these 150-foot sections were then joined together and towed to the mill. See more on Goodwin’s page ‘Understanding Sinker Cypress’. https://heartpine.com/sinker-cypress/

In general, the relative “flatness” of the South meant that rivers were wide, slow moving, and circuitous as they meandered through their flood plains. They were good log-driving streams like fast moving northern rivers. Log drives were restricted to fast-flowing headwaters and small tributaries and to a few major rivers such as the Pascagoula and Pearl in Mississippi. Generally speaking, the rafting of logs and timber was much more common in the South than driving logs.

Today Bald Cypress is still found along all the rivers here in Florida. A boat ride on the Santa Fe, the Suwannee or the Withlacoochee is graced with long sweeping green fernlike boughs and large trunks covered in thin furry bark with cypress knees several to each tree. Especially in springtime when the pale green foliage is emerging the cypress is an elegant sight. But the millennium giants are no more. Some trees of 100 years age or more left from the previous century’s cut, and many young trees are easing their way into the sunlight. But the wood from these young trees today is pale and coarse compared to the uniquely fine-grained and richly toned heartwood of pre-settlement growth cypress.

You can see Goodwin’s Sinker Cypress in renowned spaces such as Bok Tower’s Children’s Garden.