The Edge at USF

Goodwin company was proud to partner again with our good friend, architect, Beverly Frank of BFrank Studio in Tampa to help update the student commons at the University of South Florida – St. Pete.  The Edge – formerly referred to as the Coquina Club – was built during the 1970s.  The original design was very boxy and institutional, and not very user-friendly. 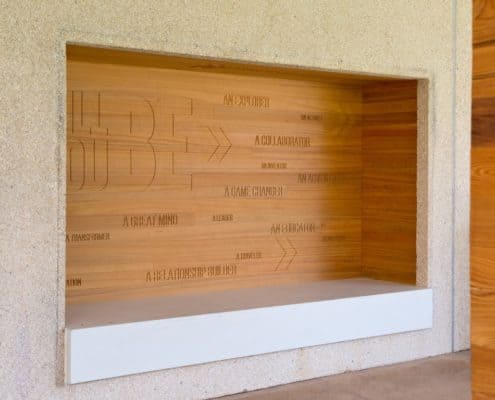 BFrank Studio updated this dated space into a modern and trendy student common area. They incorporated Goodwin’s River-Recovered® Heart Cypress in several ways throughout the site: 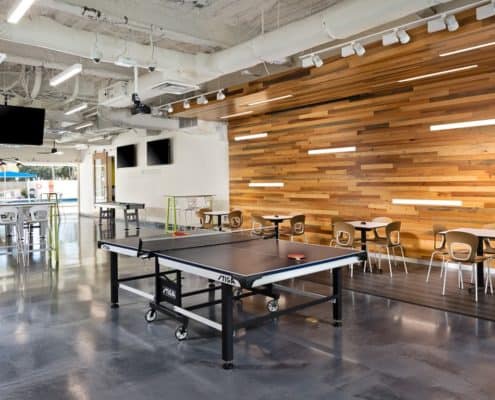 See more photos of the The Edge at USF.

For the last 45 years, the Goodwin Company has been known as millers of fine antique River Recovered® and building reclaimed Heart Pine and Heart Cypress. We are known nationwide for our tongue and groove flooring, but that is not all we do. Here at the Goodwin Company, we are proud to offer a variety of reclaimed building materials, including stair treads, risers, and handrails. Our treads are made with a bullnose and returns can be attached to either side or none at all.

We also offer a variety of architectural millworks, including quarter round, half round, and crown moulding. We have been known to make a countertop or two. We offer a wide variety of River Recovered® Heart Cypress slabs. That in the hands of the right craftsmen, can become a beautiful conference table or dinning room table for your home. 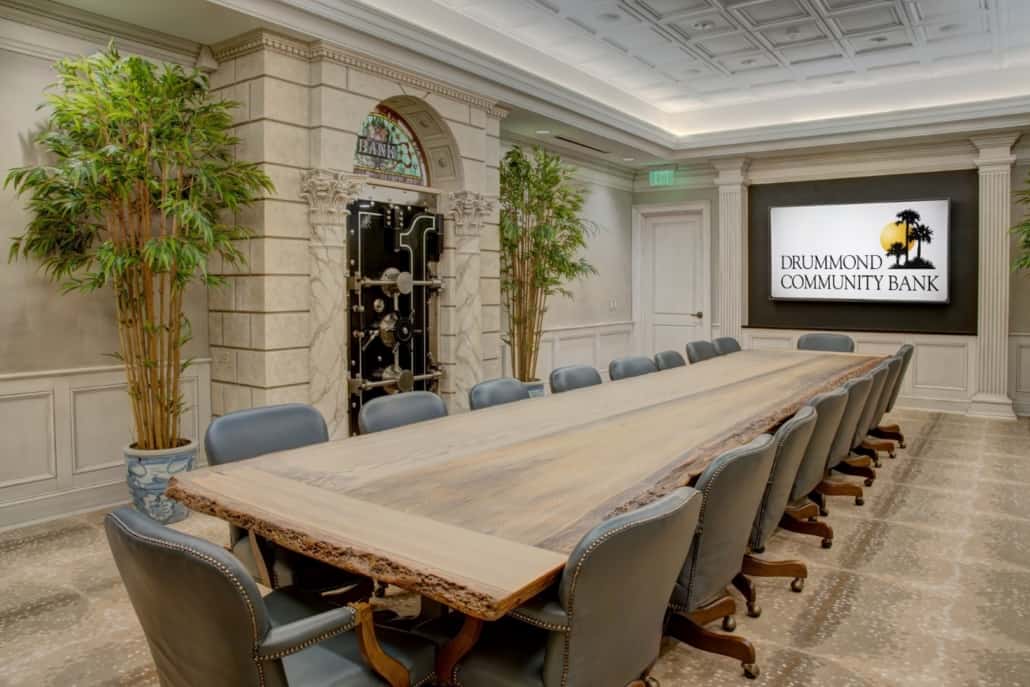 Architectural millwork is full dimension and based on the 8000 series patterns last published in 1925. Goodwin offers a complete line of moldings including base, shoe, cove or scotia, crown, step, picture, panel, thresholds, quarter round, casings, rosettes, picture frame, reeded and more.

In August 2005, Hurricane Katrina ravaged the Gulf Coast.  A great number of historic homes were among its many victims.  In Ocean Springs, Mississippi, two such notable landmarks were the Louis Sullivan and James Charnley cottages.  Charnley was a Chicago based businessman and lumber baron who owned and timbered large tracts of Mississippi longleaf pine.  Sullivan was a renowned Chicago architect and father of the modern skyscraper. He and Sullivan were good friends.  The baron commissioned the architect to design and build him a vacation home on the Gulf where he could escape the rigors and the winters of the Windy City.  On the adjacent property, Sullivan fashioned his own vacation cottage, a slightly smaller version of the Charnley retreat.

Helping to design and build these gulf side treasures in 1890 was Sullivan’s apprentice, Frank Lloyd Wright.  Actually, great controversy has revolved around exactly which architect played the greatest role in the design.  The two cottages looked nothing like the highly decorative and largely vertical Victorians and Queen Annes so popular in that day.  Instead, the cottages were quite simple and reached out across the landscape in a horizontal fashion that suggest a precursor to Wright’s later Prairie style.  They were considered to be two of the earliest examples of American modern residential architecture.

Katrina showed little mercy.  The storm battered the two homes relentlessly.  When the tempest had passed, the Sullivan cottage was completely gone.  Many have speculated that it was hit by a tornado.  Charnley was badly beaten and sat straddling what was left of its foundation.

Enter the very determined Historic Preservation Division of the Mississippi Dept. of Archives and History (MDAH). The division organized volunteers to salvage literally thousands of pieces of the home immediately after the storm and persuaded the property owners not to let FEMA bulldoze the house.  Further, the MDAH raised the grant funds that permitted the hiring of fine restoration professionals John G. Waites Associates Architects, Larry Albert & Associates Architects, and J.O. Collins Contractor to undertake the restoration.  Finally, the department assisted the Mississippi Dept. of Marine Resources in acquiring the Charnley-Norwood property as a key component of the Mississippi Gulf Coast National Heritage Area.

General contractor, J.O. Collins, began putting the survivor back together and architect, Larry Albert, spec-ed Goodwin to provide the flooring and the curly heart pine paneling on the walls.  The Goodwin company milled 800sf of curly heart pine to adorn the walls and another 1000sf of 3-1/4” LEGACY (building reclaimed) VERTICAL heart pine to replace the floor.  The resulting restoration is over the top and today, Charnley once again stands overlooking the Gulf of Mexico; a shining example of accurately and lovingly finished historic restoration.

Photo curtesy of the Mississippi Dept. of Archives and History.

Listed on the National Register of Historic places, and designated both a National and Mississippi Landmark, Beauvoir has a storied history.  The home was built by Mississippi planter, James Brown, in 1848 and completed in 1852.  She sits immediately on the Gulf of Mexico in Biloxi, a forever dynamic and saline environment.

The estate was purchased from Brown by Samuel and Sarah Dorsey in 1873.  Samuel died a few short years later.  His widow Sarah, a novelist and biographer, learned of the financial woes that had befallen former Confederate States President, Jefferson Davis.  Dorsey reached out to Davis and invited him and wife Varina Davis to join her at Beauvoir.  They accepted.

Later, as Dorsey discovered she was dying of cancer, the author bequeathed the estate to the Davises.  Jefferson and Varina moved into the home.  Davis died in 1889.  In 1902 Varina sold the property to the Sons of Confederate Veterans to be used as a veteran’s home and later a memorial to her husband.

The grand home has witnessed many storms over its nearly 175-year existence.  In 1969 it survived a battering by powerful hurricane Camille.  But in 2005 Beauvoir’s lucky streak ran out.  On August 29th hurricane Katrina, one of the strongest storms ever to hit the Gulf Coast pummeled the old house with a 20 foot plus storm surge and punishing waves.  Several structures on the campus were completely destroyed.  The storm devastated the home opening its face to the gulf waters and ripping the old growth heart cypress exterior galleries off of the wood frame structure.  That home survived, beaten, but standing.

In time, efforts came together to restore the historic home.  Structural and interior restoration took place first.  Later the broad gallery was replaced, but this time with modern, pressure treated lumber.  Fast forward nine years and in that very saline environment, the pressure treated galleries began to twist and pull up to the point of becoming a safety hazard to visitors.

The Goodwin Company was called on by General Contractor JO Collins to mill 3,112sf of 1×6 River-Recovered ® Antique Heart Cypress to restore the Beauvoir galleries and the grand front staircase. Afterall, virgin, old growth bald cypress is what the hoes stairs and galleries were milled from originally. The tight growth rings and heavy concentration of naturally occurring, wood preserving cypresene oil in the River-Recovered ® material made it the perfect, stable choice for the restoration.

Any well-done restoration is historically accurate. And while the beauty of River-Recovered ® Heart Cypress is one of its significant charms, this project was all about stability and so the galleries and stairs were painted with porch paint as they had been originally.

This week for Historic Preservation Month we revisit two restoration projects that have been honored by the Florida Trust for Historic Preservation (FTHP). In 2015 the Gainesville, FL Firestone building was recognized by the FTHP, receiving an Honorable Mention for Adaptive Reuse. In 2018 the Gainesville, FL Matheson History Museum Library & Archives was recognized by the FTHP, receiving Meritorious Achievement for Adaptive Use.

Be sure to follow the Florida Trust For Historic Preservation’s Facebook page for other historic preservation month information! 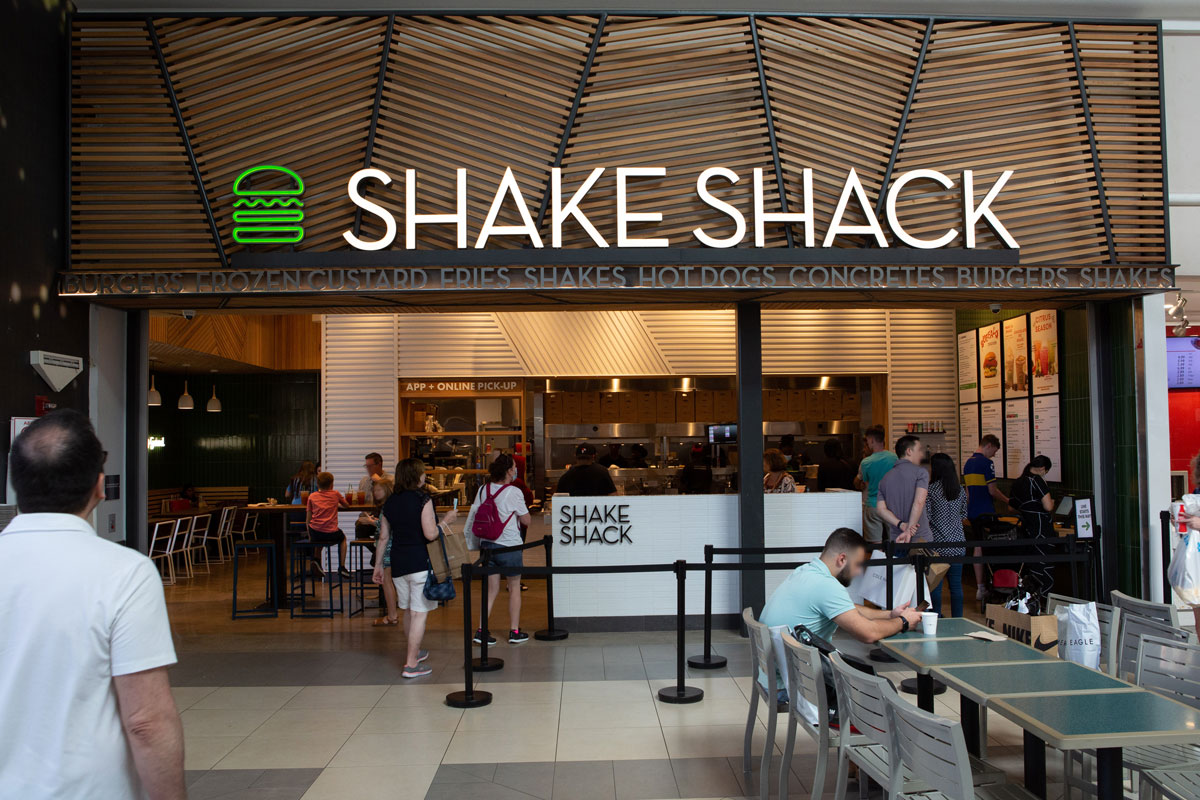 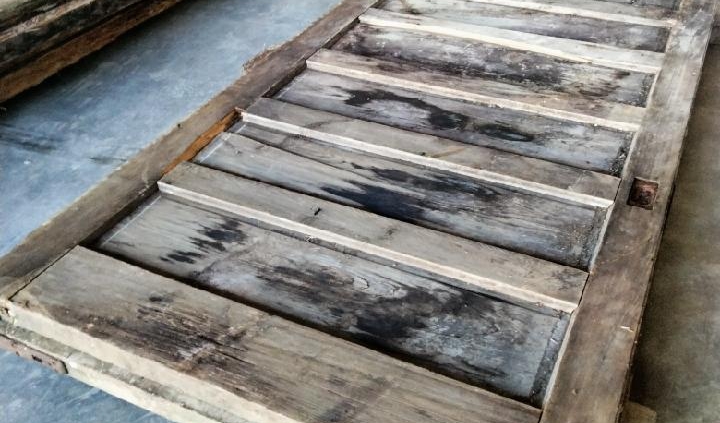